Manchester United's progress to the knockout stages was stalled on a night of sub-zero temperatures and substandard performances. Sir Alex Ferguson's team are still almost assured of joining Liverpool and Chelsea in the next phase but he is entitled to be seriously disappointed by the shortcomings that were exposed in losing to such ordinary opponents.

Marcus Allback, a striker who managed only six goals in two years at Aston Villa, stabbed in the decisive goal 73 minutes into a galling evening for England's biggest club, one that ruined their immaculate record in Group F. The Premiership leaders were desperately short of their best form, lacking any creativity or penetration. Copenhagen were willing opponents, yet limited ones, and it does not reflect well on United's long-term chances when considering the greater calibre of teams who will need to be vanquished later in the competition.

Those thoughts will have been on Ferguson's mind on the flight home to Manchester last night, as well as taking the gloss off his 20th-anniversary commemorations over the next week. But he will know the damage should be only superficial and that United were undoubtedly hindered by the absence of key players.

Ferguson was justified, too, in complaining about the effects of a Bruce Springsteen concert last weekend on the pitch. Large expanses of the turf had been so badly trampled as to destroy any grass and expose the mud. Downpours throughout the afternoon, and even the odd blizzard, had exacerbated the problem and there were areas so rutted and non-conducive to professional football it was like playing marbles on cobblestones.

"The pitch was very difficult and that's why it was the game it was," said Ferguson. "There wasn't a lot of football. It wasn't an easy pitch and it took us 20 minutes just to get any rhythm."

In the circumstances it was unreasonable to expect United to reproduce the exhilarating one-touch passing and movement seen at Bolton on Saturday, but Ferguson was surely stretching the truth when he said United had been "in control of the match" and insisted he was happy with the number of chances they created. It was a classic Ferguson ploy of protecting his players from public criticism and he followed it with several disparaging remarks about Copenhagen, effectively portraying their tactics as no more refined than the 80s Wimbledon and sniping that "what football there was came from us".

Ferguson rarely admits mistakes in public but, privately, he may feel compelled to consider his own team selection, most notably the absence of Rio Ferdinand and Paul Scholes. With Ryan Giggs, Louis Saha and Gary Neville injured, he selected only five who can realistically consider themselves mandatory first-team picks and, perhaps inevitably, there were long spells when the team struggled to replicate their highest levels of cohesion and fluency. In all the tributes to Ferguson over the coming days, his admirers may have to overlook the overconfidence he showed in making six changes from his victorious side at the weekend.

With a stronger team United could have taken an early grip on the game. Instead they flickered only sporadically. Wayne Rooney huffed and puffed but to little effect, Cristiano Ronaldo was strangely peripheral and the same could be said of Ole Gunnar Solskjaer, who eventually left the pitch with a hamstring strain.

An injury to Nemanja Vidic completed a hugely disappointing night. Michael Carrick's passing was safe rather than incisive and John O'Shea again looked conspicuously short of what it takes to be a central midfielder at the highest level. With Darren Fletcher slowly winning over his detractors, O'Shea is in danger of becoming the player the United fans fret about the most. He squandered their most inviting opportunity, 10 minutes after the interval, and it was to be a costly miss.

Edwin van der Sar, the fifth United player to be captain this season, was largely untroubled in the first three- quarters of the game. On their return from injury Gabriel Heinze and Mikaël Silvestre generally coped well and Allback's decisive contribution was an unexpected twist.

Heinze, in particular, will wince when he sees the replays, having failed to clear as Atiba Hutchinson headed down a left-wing cross for Allback inside the six-yard area. Not one United player in a congested penalty area reacted in time and Allback poked the ball past the hopelessly exposed Van der Sar. "It was a bad goal for us to lose because we knew their danger was from set pieces," Ferguson said. "Until then our defending had been very good and they had never looked like scoring."

Scholes, a substitute, had a late chance to salvage a draw but the goalkeeper Jesper Christiansen charged down his attempted lob. Then Ronaldo turned in Rooney's stoppage-time cross only for the effort to be disallowed because he was offside. The linesman's flag means United's qualification will have to wait until, at least, the visit to Celtic in 19 days.

Wayne Rooney's promotion to captain could not bring him his first Champions League goal for two years but the Manchester United striker is entitled to cherish the memories nonetheless. He wore the armband like a fashion statement and a routine win over willing but limited opponents makes it almost inconceivable that Sir Alex Ferguson's team will fail to qualify for the knock-out stages.

With a record of three successive victories, United's significant improvement in Europe can be gauged by the fact they could become one of the first teams to reach the next phase when they visit the Parken Stadium in Copenhagen on November 1. The latest triumph in Group F was accomplished courtesy of a splendid goal from Paul Scholes and fortuitous ones from John O'Shea and the substitute Kieran Richardson, though the margin of victory could have been far more handsome had United not been so "gratuitous", to use Ferguson's description.

Alan Smith, in particular, will wonder how he missed an opportunity to score after coming off the bench for the latest stage in his rehabilitation from a broken leg, but this was no time for recriminations. Ferguson spoke about a "good attacking performance", indicating that the team are being driven by their failure to qualify from a moderate group last season. "They have grown up," he said. "They don't want any more embarrassments like last season, and they're playing good football into the bargain."

Behind the scenes, the turmoil associated with the Glazers' takeover is still having repercussions judging by the resignation of two directors yesterday but on the pitch, Ferguson can be satisfied there is comparative tranquillity. FC Copenhagen were robust opponents but United are playing with the style and substance that befits a side who have spent most of season at the top of the league. They signalled their intent when Rooney sent Louis Saha scampering clear inside the opening 30 seconds and that set the tone for an evening of near-unremitting pressure.

Ferguson was particularly entitled to be satisfied given that there was a maze of fun-house mirrors to navigate before a ball had been kicked. The manager had to reconfigure his team on two occasions in quick succession, Ryan Giggs complaining of feeling unwell in the warm-up and asking to be put on the bench, followed by Rio Ferdinand pulling out with a cricked neck. In came Darren Fletcher and Wes Brown, with Rooney made captain a week before his 21st birthday. "Some players, like Paul Scholes, don't want to be captain, so it was an easy choice," said Ferguson. "And Wayne did fantastically, as I expected."

Presumably Ferguson did not consider Michael Carrick, the £18m acquisition from Tottenham whose impact has been anything but immediate. Last night's performance was laced with all the usual nice touches, a clever pass here and there and a good appreciation of the game, but it is time he started to think of himself as a big-game player who can dominate matches, particularly when the team have been deprived of several key figures.

On the night, however, it was only a small criticism. United were so dominant, so totally at ease with their superiority, that it was a night for Ferguson to delve into the pot of superlatives. He described the shot with which Scholes gave them the lead as "sensational", although the same could not be said of the second and third goals.

O'Shea's instinctive reaction was to flick the ball goalward with his right boot after Cristiano Ronaldo's corner flew into his path 38 seconds into the second half. Instead the ball struck his standing foot and ricocheted off his heel into the goal. The Irishman looked faintly embarrassed, as did Richardson when his thoroughly ordinary shot seven minutes from the end somehow squirted past the goalkeeper Jesper Christiansen, hitherto the Danes' best player.

Ferguson's smile, however, was that of a contented man, United's evening tarnished only by the resignations of Nick Humby and Andy Anson, both of whom have attained jobs elsewhere after becoming increasingly marginalised and disillusioned under the Glazers.

The departure of two largely unseen executives will scarcely register on the scale of sopa-opera storylines, but it is another reminder that all may not be as hunky dory as the club would like to portray. David Gill, the chief executive, described himself as "very disappointed" although the team's progress in Europe, and what it means in a financial sense, should go some way to lightening his mood. 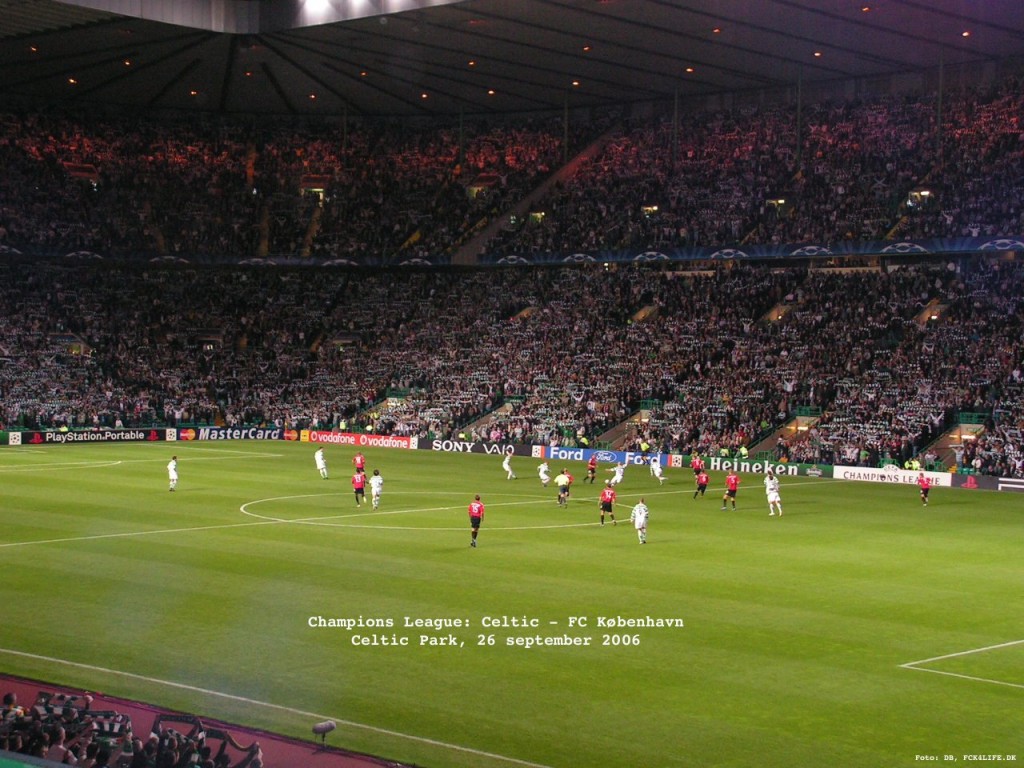